This piece is a good representative of the transition in Scottish samplers from pure band formatting to a more pictorial style. Jane's use of red thread in the top half of the sampler was a brilliant design choice - each band is very vibrant, especially when compared to the rather bland colour choices of the house section.

The very top band has five identical alphabets - after each alphabet a variety of numerals and familial initials complete each line. Note how appealing it is that the letters alternate between red and green. The next band is presented as a fully bordered cartouche; the border and text of which are stitched entirely in red silk. Her entire verse has been stitched in capital letters, but used as lower case sized except for a few words. Directlly above the house is a beautiful band of undulating carnations with both blooms and buds. Again, the red threads make this entire band just pop.

The house has four pillars and a blue roof with two chimneys. The fenced lawn is terraced, a fairly unusual depiction. Flanking the house on both sides are stands of trees, above which are oversized roses. Jane strategically placed her signature beneath the walled garden and surrounded the entire piece with a delicate strawberry border.

Jane married William Turnbull, a cotton factory manager on 26 April 1824. The couple had two children John (1827) and Marion (1829). Jane outlived her husband and died in November 1882 in Glasgow. 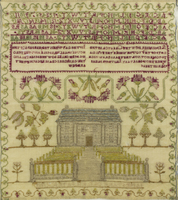