When a sampler has this complex a building portrayed it inspires an all out quest to determine if it is a real structure. After years of research, the building has been identified as the old Paisley County Jail and Municipal Building, built in 1818 and demolished in the 1960's. Very few pictures have survived but the one we have included below is a good representation of the very stately and imposing structure the building once was. Agnes did an excellent job of translating it into needlework.

Agnes has also stitched many traditional sampler elements, such as the eyelet alphabet and a generous selection of familial initials and names (Alexander Thomson, Agnes McGill, DT, MR, JM CG, AK, AF, ML, DT, MT, JT, JT, AT, JT, JH, GB, MH, JH, JK, JK, MC, MM CW, AD, AD, A WD, AD, J DICK). Between the initials and the Old Prison building, Agnes included two different styles of peacocks and an assortment of Dutch floral motifs. Small house motifs flank her signature; the inclusion of "Paisley" gives further evidence toward identifying the building. Her undulating floral border is multicoloured but sadly a framer at some point glued the edge directly to a backing board resulting in severe damage to the ground and border over the years. Rest assured the sampler has been separated from the board and conserved.

Agness married John Dick, a printer, 25 October 1828. After their marriage we have had a difficult time tracking their movements and believe they moved to England. 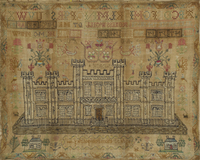