Esther's Hawick companion sampler is one of the sadder ones, with a fair amount of moth damage and darkening of the wool ground. Her house was once pink, which is faintly visible in pictures of the reverse side. The cheneille of her lawn does appear to have started as a brown hue, and it has only darkened over time. The floral vine and central flower along the top are still in good shape and relatively vibrant. As with Eliza Henderson, her familial initials (IS, TS, RO, WO, CO, WI, IS, TD, RS, IO, RS, RS, AI, AO, RD, IS, WS) flank the house and are below the willow trees with varigated leaves. 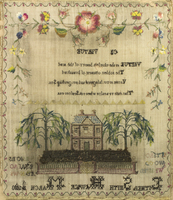