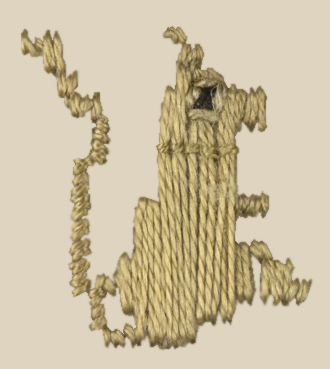 The combination of traditional elements and unusual formatting make this sampler a knockout. At the center of the top band is a traditional pansy motif, bracketed by vines. In the platform, or perhaps hillock, the pansy is resting on, Jennet has used black threaded seed stitch to represent wood or soil. This is a technique we have not seen on other Scottish samplers.

The center band is not symmetrically balanced but instead has a lengthy verse on the left side and and a large castle under a tree on the right side. The peacock sitting in the topmost branch of the tree is quite fun and the free-form chicken clearly has a worm in its beak. Several other birds and a variety of insects are scattered within the text and leaves of the tree. If you follow the trunk of the tree to its bottom you can see where Jennet has done seed stitch to again represent a mound. We have yet to determine the golden padded satin bumps in the mound. The castle is in itself a conundrum, appearing more of a fairy tale castle than an actual Scottish building.

The bottom of the sampler has a plethora of familial initials (IW, HA, II, AW, WW, IW, IW, IW, IW, IW, IA, BA, IH, IH, II, AW, II, CS, II, HB, II, BI, II, V, WI, II, MI, CI, GD, HI, ID, RD, IT, IP, MP, V, AO) balanced to either side of a colorfully-hulled Dutch barge with two men aboard. Note the stylized fleur-de-lis in each of the corners. The simple pansy border finishes the sampler without overwhelming the complex images within it. Overall this piece is very neatly stitched and we are glad the colours of the threads are so strong.

John Wilson, a baker, and his wife Helen Amos of Hawick christened their only daughter Janet 29 November 1783. Her christening was witnessed by James Wilson, a surgeon, and James Inglis, the Postmaster. Siblings were Andrew (1781), William (1785) and James (1787).

Jennet married James Davidson, a tennant farmer at Hyndlie, 25 December 1812 in Southdean, Roxburghshire. James was almost 20 years older than his wife. Children were George (1813), John (1815) and Helen (1817). James died in 1820 in Jedburgh; we are shuffling through his lengthy will to determine any salacious facts. Jennet died in 1855 as witnessed by her son-in-law Joseph Harper. 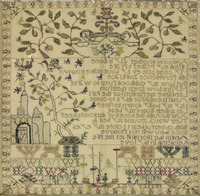